This outer crossing of the Baltimore Harbor opened in March 1977 as the final link in I-695 (the Baltimore Beltway). The 1.6 mile Key Bridge crosses over the Patapsco River where Francis Scott Key was inspired to write the words of the Star Spangled Banner. This facility also includes the Curtis Creek Drawbridge. Including the bridge and approach roadways, the facility is approximately 10.9 miles in length.

The E-ZPass® electronic-toll-collection system is available at the Francis Scott Key Bridge.

The Francis Scott Key Bridge opened in March 1977 and is named for the author of the Star Spangled Banner. The bridge is the outermost of three toll crossings of Baltimore's Harbor. Upon completion, the bridge structure and its approaches became the final links in Interstate 695 (the Baltimore Beltway).

By the early 1960s, the Baltimore Harbor Tunnel (Interstate 895), the first crossing of Baltimore's Harbor, had reached its traffic capacity, and motorists encountered heavy congestion and delays almost daily during rush hours. The State Roads Commission, predecessor of the Maryland Transportation Authority (MDTA), concluded there was a need for a second harbor crossing and began planning a single-tube tunnel under the Patapsco River, downstream from the Harbor Tunnel. The proposed site was between Hawkins Point and Sollers Point. Plans also were underway for a drawbridge over Curtis Creek to connect Hawkins Point to Sollers Point.

Contractors took borings of the harbor bottom in the spring of 1969. Bids for construction of the proposed tunnel were opened on July 30, 1970, but price proposals were substantially higher than the engineering estimates. Officials drafted alternative plans, including the concept of a four-lane bridge.

The bridge, at an estimated cost of $110 million, represented the best alternative because it allowed for more traffic lanes and carried lower operating and maintenance costs than a tunnel. In addition, a bridge would provide a route across the Baltimore Harbor for vehicles transporting hazardous materials (these materials are prohibited from both the Baltimore Harbor and Fort McHenry [Interstate 95] tunnels).

Construction on the Francis Scott Key Bridge began in 1972, and the bridge opened to traffic on March 23, 1977. Including its connecting approaches, the bridge project is 10.9 miles in length. Other structures along the thruway include a .64-mile dual-span drawbridge over Curtis Creek and two .74-mile parallel bridge structures that carry traffic over Bear Creek, near Bethlehem Steel's Sparrows Point plant.

The Key Bridge is located in an area rich with American history. Scholars believe the span crosses within 100 yards of the site where Francis Scott Key witnessed the bombardment of Fort McHenry on the evening of Sept. 12, 1814. That battle inspired Key to write the words of the Star Spangled Banner.

Located just southeast of the bridge are the ruins of Fort Carroll, a 3.4-acre man-made island. The structure was designed by then Brevet-Colonel Robert E. Lee and named for Charles Carroll of Carrollton, a signer of the Declaration of Independence.

Construction of the fort began in 1848, under the supervision of Brevet-Colonel Lee, U.S. Army Corps of Engineers. Fort Carroll was important for the defense of Baltimore -- before the fort was created, the only military defensive structure between Baltimore and the Chesapeake Bay was Fort McHenry.

The government abandoned the fort as a military post in 1920, and the island was declared excess property in 1923. However, the War Department took no immediate steps to sell the land. In May 1958, a Baltimore attorney purchased the island for $10,000, but development plans never materialized. The fort now is deserted.

Along with the Fort McHenry and Baltimore Harbor Tunnels, the Francis Scott Key Bridge is part of a network of Baltimore Harbor crossings that provides convenient and safe transportation for local and interstate traffic. 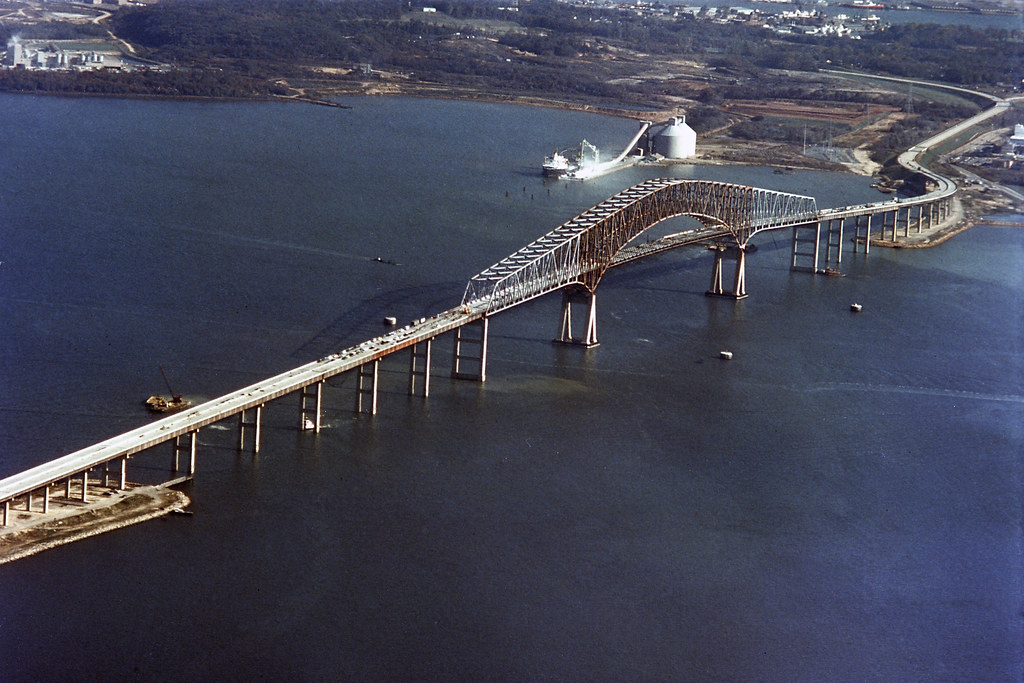