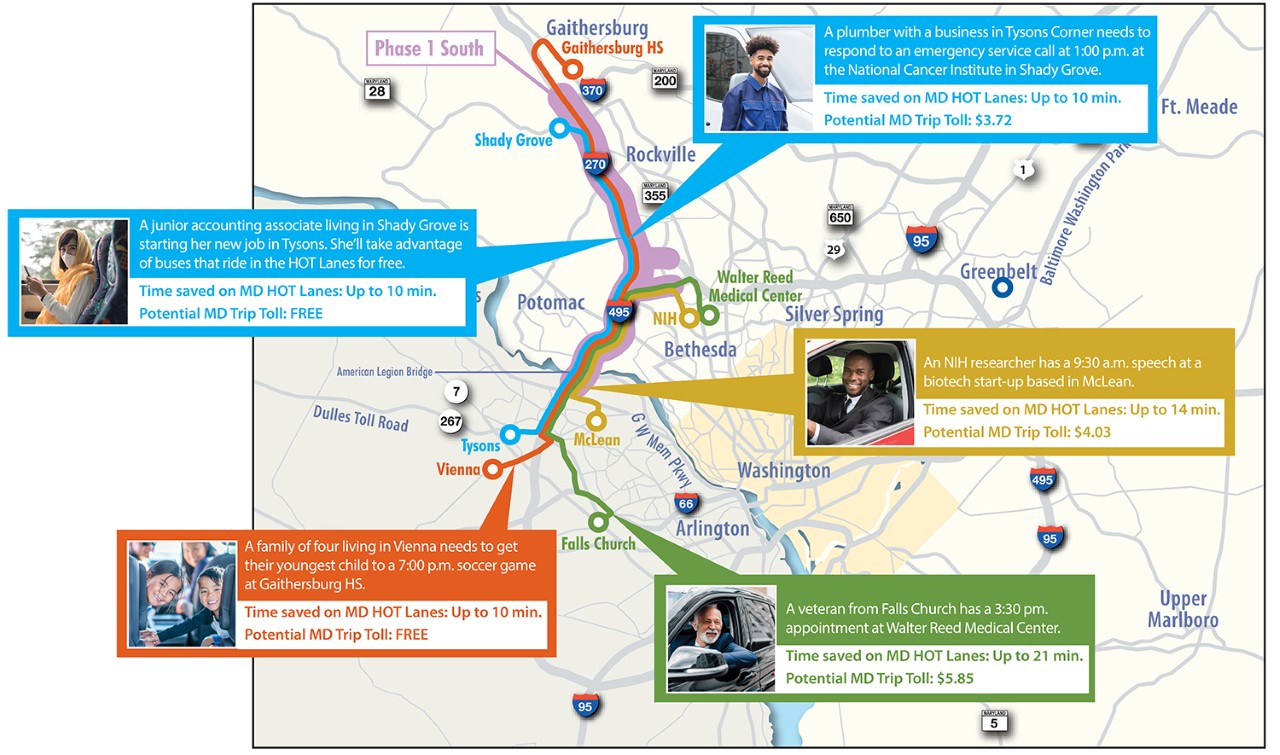 The Maryland Transportation Authority (MDTA) held public hearings in July 2021 as part of the toll rate range setting process’ first of three public-comment periods for the proposed High Occupancy Toll (HOT) lanes within Phase 1 South: American Legion Bridge I-270 to I-370, which will be part of the Op Lanes Maryland program. Elements of the MDTA staff tolling proposal for public comment included: Minimum and Maximum Toll Rate Ranges, Soft Rate Caps, Escalation Factors, and Discounts.  In addition to providing testimony at a public hearing, the MDTA also provided opportunities for the public to comment on the tolling proposal in writing and via and voicemail during the first public comment period from May 20, 2021 through 5 p.m. Thursday, August 12. Public hearing materials, including the original tolling proposal, have been archived and may be accessed by visiting the Public Hearing Virtual Information Room Archive page.

As a result of comments received during the first public-comment period, the recommended toll rate ranges reflect a new base minimum per-mile toll rate of 17 cents/mile, which is lower than the 20 cents/mile proposed in May. The 17 cents/mile is consistent with the base off-peak minimum per-mile toll rate for the MDTA’s Intercounty Connector (ICC)/MD 200. In addition to the new Op Lanes, all existing general purpose lanes across the American Legion Bridge and north on I-270 to I-370 would remain, and would be free for use by all motorists. The Recommended Action (recommended toll rate ranges) were presented by the MDTA staff to the MDTA Board during a livestreamed public meeting on September 30, 2021. The MDTA Board voted at the September 30 meeting to seek comments on the Recommended Action (recommended toll rate ranges) during a second public-comment period, which opened September 30, 2021 and continued through 5:00 PM Thursday, October 28, 2021.

On November 12, MDTA staff posted a summary and analysis of comments received during the second public comment period (and raw comment database) to MDTA’s web site. The comment summary also was presented during a livestreamed MDTA Board meeting that was open to the public on November 18, 2021 at 9 a.m. At this meeting, MDTA staff presented the final toll rate range recommendation to the Board, which included no changes to any elements of the Recommended Action (recommended toll rate ranges) that was presented on September 30. Prior to the vote to approve the final toll rate ranges, which will be part of the Op Lanes Maryland program, the MDTA Board opened the floor for additional in-person comments. However no members of the public attended the meeting to provide comments.