The Maryland Transportation Authority (MDTA) initiated the current I-95/Carroll Camden Access Study to help determine whether or not to conduct a project planning study under the National Environmental Policy Act (NEPA). The current study, which is anticipated to be completed in late 2012, was launched as a follow-up study to the 2004 I-95/Carroll Camden Access Feasibility Study. The purpose of this new study is to: 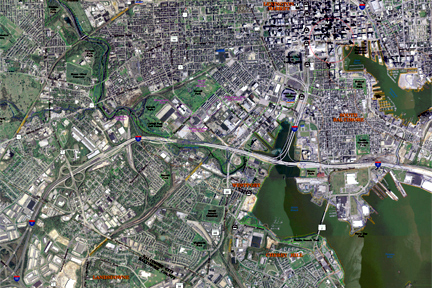 The study area is located in the southwestern portion of the City of Baltimore, and is bounded by I-95 to the south, Martin Luther King Jr. Boulevard to the north, Hanover Street to the east and Caton Avenue to the west. The study area includes the I-95 interchanges with I-395, MD 295/Russell Street, Washington Boulevard, and Caton Avenue, as well as major surface streets within these boundaries.

A crash history analysis and a capacity analysis were performed for the freeways and interchanges in the study area under Existing conditions. Capacity analyses were also performed using CLA for surface street intersections and HCS+ for freeways and interchanges for Existing and 2035 No-Build and Build conditions. VISSIM, a state-of-the-art traffic simulation software package, was used to perform a simulation of No-Build and Build conditions during both the AM
and the PM peak hours.

The study team used the recommendations from the 2004 Feasibility Study as a starting point for the development of new concepts that could better meet the project goals. The team examined each of the access points along I-95 within the study area, and noted the places where there were "missing movements," or places where drivers were restricted from traveling in a particular direction due to roadway geometrics, ramp configurations, etc. Using the results of the traffic analysis, the team then considered ways to provide new access to Carroll Camden by adding these "missing movements," and, through a series of meetings and discussions, created 12 new preliminary concepts.

Based on the suggestions and feedback from at the study team, which was made up of representatives from MDTA, Federal Highway Administration (FHWA), Baltimore City Department of Transportation (BCDOT) and the Baltimore Development Corporation (BDC), elements of the 12 preliminary concepts were combined to create four possible improvements to be forwarded for more detailed study. These are identified as Concepts A, B, C and D. These
combined concepts represent low, medium, and high levels of cost, with Concept C representing the lower level of cost, Concept B the medium level, and Concepts A and D the higher level cost options.

Concept A consists of the construction of a new collector-distributor (C-D) road along southbound I-95 between MD 295/Russell Street and Caton Avenue, and an extension of the existing C-D road along northbound I-95 from Washington Boulevard to east of MD 295/Russell Street. The neat construction cost, which includes highway design, bridge design, traffic engineering and utility costs but excludes right-of-way, is estimated at $365 million in 2009 dollars.

Concept C consists of constructing ramps to provide all missing movements at the interchange of I-95 and Washington Boulevard, closing access to the existing northbound I-95 C-D road north of Caton Avenue, and re-constructing the on-ramp connection from Caton Avenue to northbound I-95. It also involves closing the existing ramp from southbound MD 295/Russell Street to southbound I-95 to prevent the introduction of a weaving section due to the new Washington Boulevard off-ramp. The neat construction cost (excluding right-of-way) is estimated at $17 million in 2009 dollars.

These concepts are shown in detail in this report. The microsimulation analysis of northbound I-95 shows that Concept A works better during the AM peak hour than any of the other improvement concepts, due to the elimination of the weaving area between the Caton Avenue on-ramp and the MD 295/Russell Street off-ramp. During the PM peak hour, Concept A works better than the others, but offers no real improvement over the existing I-95 network. The analysis of southbound I-95 shows that Concept A works slightly better than any other concept, but the differences are minimal.

While the preliminary engineering shows that improvements to access between I-95 and the Carroll Camden area are geometrically feasible, they would be complex and costly. Preliminary analyses revealed that Concept D would likely be impractical to build because of its high cost and the fact that there does not appear to be a practical means of maintaining traffic on the existing directional ramps during construction. Under the current guidelines, IAPA requirements must be met any time existing interstate ramps are modified or relocated. In cases where the FHWA-required one mile spacing between ramps is not met, a design exception may be necessary. As all four of the proposed improvement concepts involve adding or modifying access to I-95, any improvement concept retained for more detailed design would have to meet the criteria necessary for IAPA. Members of the study team met with representatives from FHWA to review the improvement concepts and solicit their feedback. FHWA's review of the preliminary improvement concepts determined that none of them were likely to meet IAPA requirements because the proposed changes would not meet the one mile spacing requirement between interchanges. The required close spacing of ramps would lead to unacceptable merge and diverge distances and create additional operational issues on I-95.

For a copy of the complete study, please contact the MDTA's Division of Capital Planning at 410-537-5670.