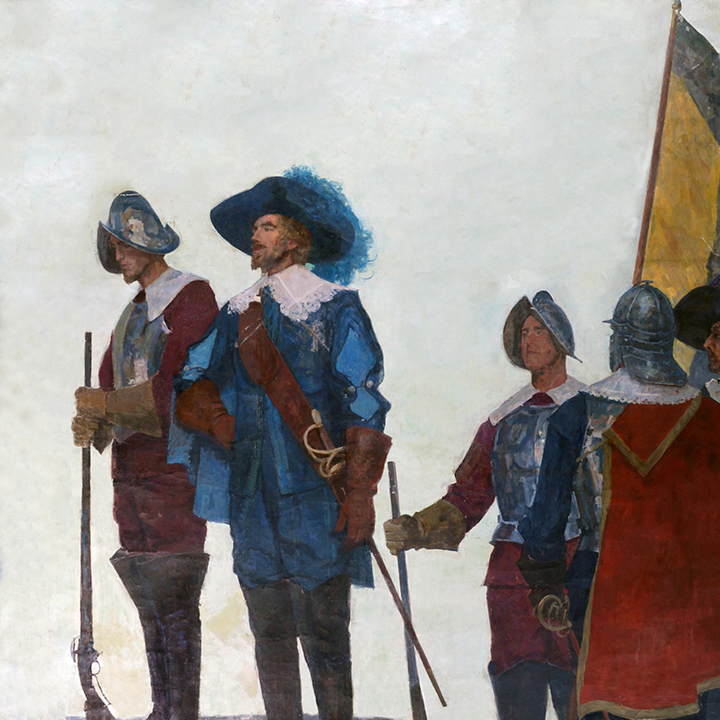 In 1966, the State Roads Commission, predecessor to the Maryland Transportation Authority, contracted with Gladieux Corporation to make decorative improvements to the Maryland House Travel Plaza on I-95 in Aberdeen, MD. Pennsylvania artist William A. Smith was commissioned to create mural panels that depicted individuals and events important to Maryland’s history. The nine-panel, oil-on-canvas murals were installed in the lobby of the Maryland House on April 2, 1968.

The largest panel was installed in the lobby of Maryland House. It included scenes titled “Lord Calvert’s Negotiating with Native Americans” and “Ark and Dove.” It was removed in March 1989 for restoration. Two portions were restored by a local conservator and gifted to St. Mary’s College.

Two, four-scene panel murals hung across from each other on the north and south wall above the lobby and remained there until they were removed in September 2002 as part of the travel plaza reconstruction project. William A. Smith’s family was asked for their opinions on dividing the second floor murals into smaller sections, and they agreed. 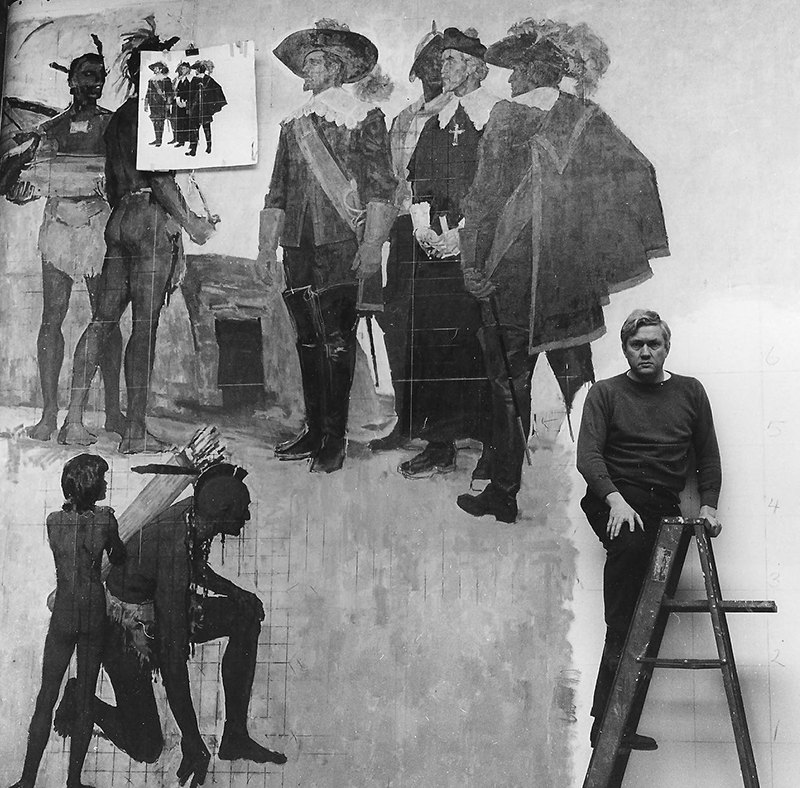 William Arthur Smith (1918-1989) was a portraitist and illustrator whose work appeared regularly in the Saturday Evening Post, Cosmopolitan, True, and other publications. In addition to painting the Maryland House historical murals, he designed 10 postage stamps, including the “Rise of the Spirit of Independence” series and the Boston Tea Party four-stamp block, which received the stamp of the year award in 1973. His portrait of Carl Sandburg is on display in the National Portrait Gallery, and additional work is in the collections of the Library of Congress, Metropolitan Museum of Art, the James A. Michener Museum, and the National Gallery of Art. 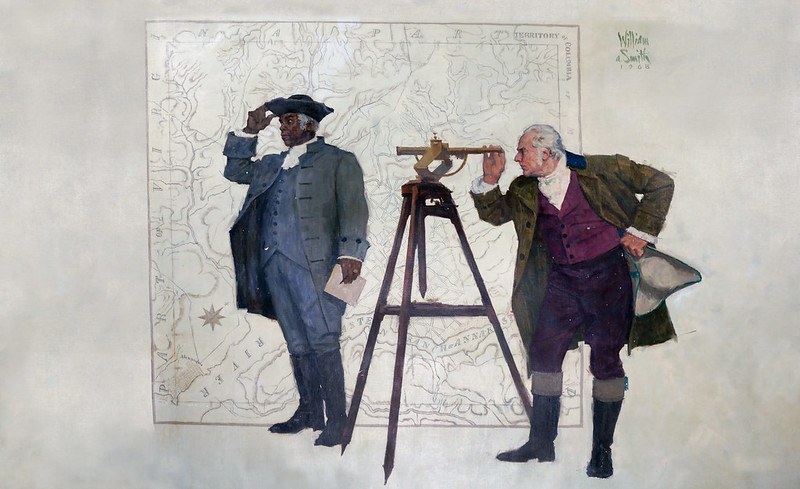 The Andrew Ellicott-Benjamin Banneker mural is part of a rare collection of murals commissioned by the State of Maryland, just two years after the signing of the Civil Rights Act of 1964. The mural was unveiled at the Banneker-Douglass Museum during Black History Month, February 2022. The Andrew Ellicott & Benjamin Banneker Surveying the Boundaries of the District of Columbia mural honors two extraordinary historical figures.

About Andrew Ellicott
Andrew Ellicott was the premier land surveyor in the United States from 1784 to 1820. He was called upon to perform many significant surveys such as the completion of the Mason/Dixon Line and the original survey of the area designated to become our nation’s capital. He surveyed the borders of no less than eleven of our states and surveyed both the northern and southern boundaries of the United States. Ellicott was well-known by George Washington, Thomas Jefferson and Benjamin Franklin. He became the Secretary of the Pennsylvania Land Office and served as a mentor for Meriwether Lewis. In later years he became a professor of mathematics at West Point Military Academy.

About Benjamin Banneker
Benjamin Banneker was a man of extraordinary accomplishments who lived during the eighteenth century. He was largely self-taught in the fields of astronomy, mathematics, surveying, and natural history. He produced a series of commercially successful almanacs and constructed what is possibly the first striking clock made in the United States, built entirely of wood. He assisted Andrew Ellicott in the land survey that became our nation's capital, Washington D.C. Banneker was a free landowning African-American who farmed and lived in Oella near Ellicott City, Maryland.